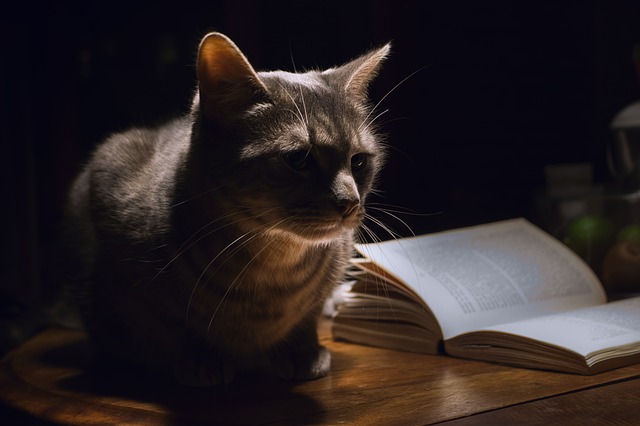 I went to a lecture during which photographs of dogs and cats were presented on a screen and students were asked to state what emotion the animal was showing. It was easy enough with the snarling dog or the cat, ears back and fur standing on end, arching it’s back in the presence of a Rottweiler. Far more speculative were those in which subtle emotions–thoughtfulness, worry–were brought into possibility. Photographs of animals are deceptive as an animal’s face may coincidentally assume an expression we associate with human emotion and we, as masterful readers of human emotion, then impute our species-specific ideas onto the animal in question.

Anthropomorphic guesswork is fun. It’s what makes us spend hours laughing at photographs of cute puppies on the internet or watching (as I do) William Braden’s ingenious youtube channel, HenriLeChatNoir, during which we listen to the existential reflections attributed to Henri the cat, whose indifferent expressions are paired with such statements as, “None of the (Halloween) costumes are truly scary. No one dresses as crippling self-doubt.”

It turns out, however, that among the great array of people studying animals, a group that includes psychologists, neurologists, behaviourists, ethologists and zoologists for a start, the question of animals and emotions is greatly disputed. During the presentation we saw a clip from Animal Planet about a cat that adopts a clutch of newly hatched ducklings the very day she gives birth to her own kittens.

The story is remarkable because one would have expected the cat to kill and eat the ducklings, which is exactly what might have happened if her kittens had been old enough to consume solid food. Instead, the oxytocin surge experienced by all mammals upon giving birth was timed within this particular mother cat so that she extended her maternal drive to the ducklings and reared them as her own. The lesson for us students was that the cat, under the influence of oxytocin, showed specific behavioural patterns far outside what we normally attribute to this predatory species. But there were no emotions, as we humans understand emotion, behind its behaviour.

Oxytocin is huge part of all mammals’ lives, including humans. It has been demonstrated to reduce fight/flight behaviour, reduce anti-social behaviour , counteract the stress hormone cortisol , and predict bonding behaviour with young. It is also the thing that makes sex so important among human couples, as both men and women experience oxytocin surges that facilitate bonding during and after making love.

When dog ethologists wish to strip away the possibility of dogs having any real emotions they may go the route of Ray Coppinger whose 2001 book argues that what we assume to be emotions in dogs are genetically programmed motor reflexes or biologically-drive hormone surges. He tells a story about his dog, Lina, who gave birth to a puppy in a field and returned to her nest in the barn to deliver the rest of the litter, leaving the puppy alone and calling in distress. Even though the puppy was calling for her and would shortly die, Lina had not yet experienced the hormonal surge that follows birth, so did not feel the need to retrieve her pup (though Ray did).

He also tells the story about another dog, Tilly, who made no effort to attend to her puppy when it made a similar distress call at a few weeks old. Were Ray’s dogs heartless mothers? He argues that the retrieval motor pattern switches on following birth (but not during it) and switches off in the mother dog at around day fourteen of her pups’ lives. Pups can cry all they want outside of these times, but a mother dog doesn’t feel anything. She takes orders from her hormones, not her heart.

“Scientists are sometimes accused of not being aware that animals have emotions or can think. On the other hand, scientists warn people that they should not be anthropomorphic, giving animals human characters,” writes Coppinger, who does not believe a dog has “a mind”, but a kind of neurological control system preserving its life and whatever system will push its genes into the next generation.

So, what are we pet owners to make of this? Do we believe that our pets don’t care about us, but are only showing biologically driven responses to our care-giving? Do they not care about their own young, have absolutely no feelings about them at all, but are subject to whatever hormones are at play?

Scientists seem determined to shame us for imputing human-grade emotions on animals. It should make us all uncomfortable, however, to realize that many of the same arguments used by scientists (and farmers) to prevent us from having too much empathy for animals are similar to those advanced years ago about human children. Until late last century the same scientists that would have laughed at those of us who won’t eat animals (because animals have feelings) would have laughed at us for assuming human babies had feelings–even physical sensations–which is why operations were performed without anaesthesia on human infants until the late 1970’s.

Can we compare our human rationale for such barbarism toward our own infants to whatever is behind the thinking of stressed mother hamsters who eat their perfectly healthy newborns in an act of filial cannibalism? Probably not, as the hamster mother may not truly think about what she is doing as she is unlikely to have as developed a mind as we do. However, the fact that we would operate on infants without anaesthetic creates a problem for us–how can we claim to be more disposed to a cohesive way of thinking, believing, feeling and acting if in our history we have regularly cut open babies without giving them anaesthetic? Indeed, we might conclude from everything we do to one another and to the species and environment around us that our minds are clouded, our influences primitive.

The divisions insisted upon by scientists seem arbitrary. We know that the presence of noradrenaline in our brains is part of what makes you and me (as well as foxes and rabbits) feel anxious. We also know that a glut of glucocortisoids is a marker for when we feel depressed. I may be depressed because I am lonely–the same reason the dog left on its own for fourteen hours daily feels depressed. The dog and I may even share the presence of corticosteroids in our brains. But according to the scientists, we cannot compare our feelings. I have a “mind” but the dog does not.

It is easy to dismiss the emotional lives of animals because their range of display is not an exact match for our own and because it means those who eat meat can feel less guilty about consuming them as food. However, before we decide that animals’ emotional lives are absent, or so profoundly reduced that only silly people would compare them to that of humans, it’s worth thinking about how much of our own behaviour is governed by hormones.

I admit to having had no interest in babies before I gave birth to my daughter. At nine months pregnant, I looked at others’ newborns and felt nothing whatsoever, just as I have no interest in babies now that my own children are grown. Nonetheless, I gave birth, fell in love with my daughter, and have adored both my children ever since. Did the release of maternal hormones following my own children’s births give a temporary rise to patterns of maternal care until more complex social bonds could be established between us? Or do I just love my children? Or does it matter? We are separating out emotions from the presence of certain neurochemicals as though these things can be separated–is that wise?

The neuroscientist and author, Antonio Demasio, explains in his 2006 book, Descartes Error, that “Nature appears to have built the apparatus of rationality not just on top of the apparatus of biological regulation, but also from it and with it.” Descartes flawed legacy to us was in his argument that the mind and body are somehow separate, and that our minds drive our bodily behaviour.

Is the insistence of a separation between true emotions and the neurological processes governing them an analogous error to that of Descartes? Is it correct to imagine that neurotransmitters and hormones that influence the behaviour of animals are separate in kind from the emotions that govern human behaviour? After all, the brains of all mammals are remarkably similar in structure.

Damasio is not writing about dogs when he says, “Brains can have many intervening steps in the circuits mediating between stimulus and response, and still have no mind, if they do not meet an essential condition: the ability to display images internally and to order those images in a process called thought.” However, some might think this is a good summation of why a mother dog appears to love her young, but is only following innate motor patterns. I’m not going to take up the argument, but I will say that even if we conclude that the mother dog’s behaviour toward her pups was entirely instinctive and without any cognitive thinking, we cannot necessarily conclude that dogs have no “mind.” The logical extension of the observed behaviour in the mother dog (not picking up her puppy) does not explain everything about a dog’s “mind” any more than the influence of oxytocin on my behaviour as a young mother explains everything about my mind. It’s a little bit of observational data, not a conclusion in itself. And nobody ever tested me out with a duckling.